Haven't posted in awhile because have been quite busy. Along with the usual study, job search, work, school, etc. Niko and I have had many adventures. First off, earlier in the week we visited Jyväskylä. Jyväskylä is a city in central Finland, about 2-3 hours from Kouvola. It is one of the larger cities in Finland, not as big as Helsinki but still quite large. We drove and walked around the city a bit, had some food at a pizza buffet, then continued our journey. It was raining (and yes, even had small snow at points), but that didn't stop the checkers from finding someone parked in a pay spot with their ticket expired. The checker left them a ticket a minute later. 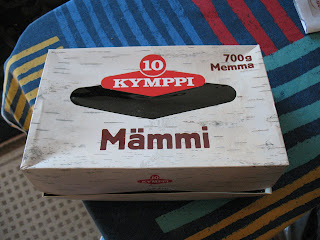 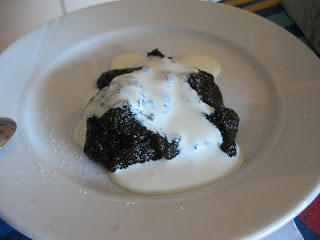 This past Sunday was Easter. I already posted previously about the children witches and their magical wands and how they get giant chocolate eggs with toys. But I HAD to try the traditional Finnish Easter food of Mämmi. This strange food is a dessert made out of rye, sort of porridge like and can be eaten with sugar and cream or ice cream. It has been around for centuries in Finland. It is sold in almost every store or you can make it yourself. But it also has the worst reputation of any Finnish food, because of it's horrible appearance. It is the source of endless jokes and horror for those who don't have knowledge of it or understand it. And not only that but many Finns can't stand it. In fact, I don't think even Gordon Ramsey would eat this stuff. It's one of those foods that if you ask ,What does it taste like, there is no real answer, but to me, the closest thing I could come up with was that it reminded me of raw gingerbread dough. So I think I'll pass eating it in the future, but it was fun to try. 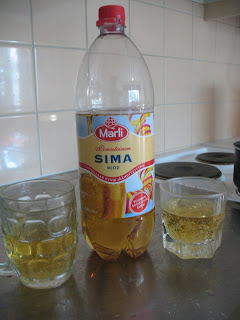 There is another holiday in Finland, starting in May (or April, or last week, depending on where you live) called Vappu. It's a festival mostly for those around student age, lots of parties and the students get to wear their graduation caps and pants that show what they study and like many holidays it has it's own food and drink including Sima. It can be either alcoholic or non, the version we got was store bought and more of a soda type drink. But it's a fun time for students to take it easy before and after exams and it's a big deal in Helsinki, especially.

The last adventure of the week was going to Sirkus Finlandia (Circus Finland). It was fun. There were acrobats, horses, dogs (watch the video!), clowns and all the music was from a live band. 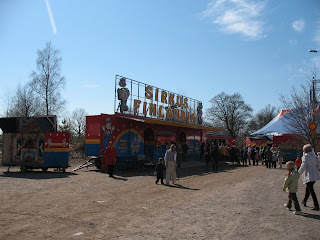 The weather here has gotten much warmer. The snow is completely gone from the roads and walkways, only the big piles that the plow and machines piled up are left. I have put my woolen coat away, though I did wear it on the trip to Jyväskylä, the snow boots are gone, no more hat or scarf or gloves and I even wore shorts today. I have made quite a few treks (walks) to the city center, which is about a 20-30 minute walk and it is much nicer to do so now than trudging through snow. As you can see in the photo, Finland now has blue skies and grass and even flowers begin to show. It's so warm here (60-65F btw, 20C today) that everyone says ,Kesä tulee kohta, (it will soon be summer), which I find absurd, but still enjoy the nice weather and sunshine. On the other hand, it also means the day is longer. The sunrises around 5:30am now and doesn't "set" until after 8:30pm, but it doesn't get dark anymore. The nights are now a shade of dark blue and as the days progress, it will get lighter and lighter longer and longer. It means you can stay out, go out, do things later than one might normally in USA, and since it never gets dark, the weather doesn't drop much, so it doesn't get that much cooler in the evenings than during the day. 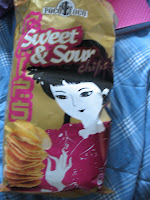 Hope you enjoy reading.  Have some Sweet and Sour chips...

Kati
An American expat living in Finland, experiencing finnish language and culture, all in the middle of winter. 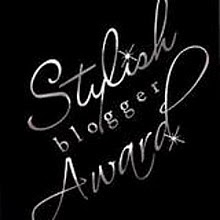